Save all year
Membership

Our EweTube live stream of our Lambing Live tents is now live for you to watch. There’s 2 cameras to choose from. We’re expecting approximately 130 lambs to be born this February. You can come and see the ewes and lambs (and feed our cade lambs) during our New Life on the Farm event from 16 to 24 February. Find out more… 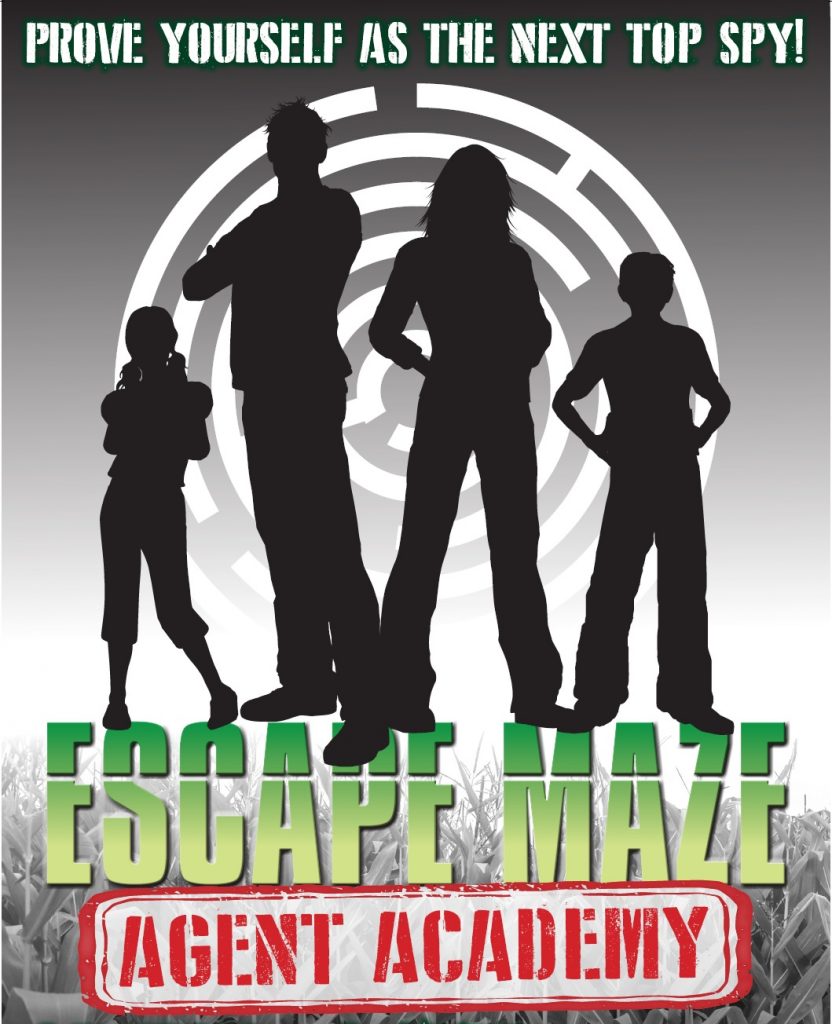 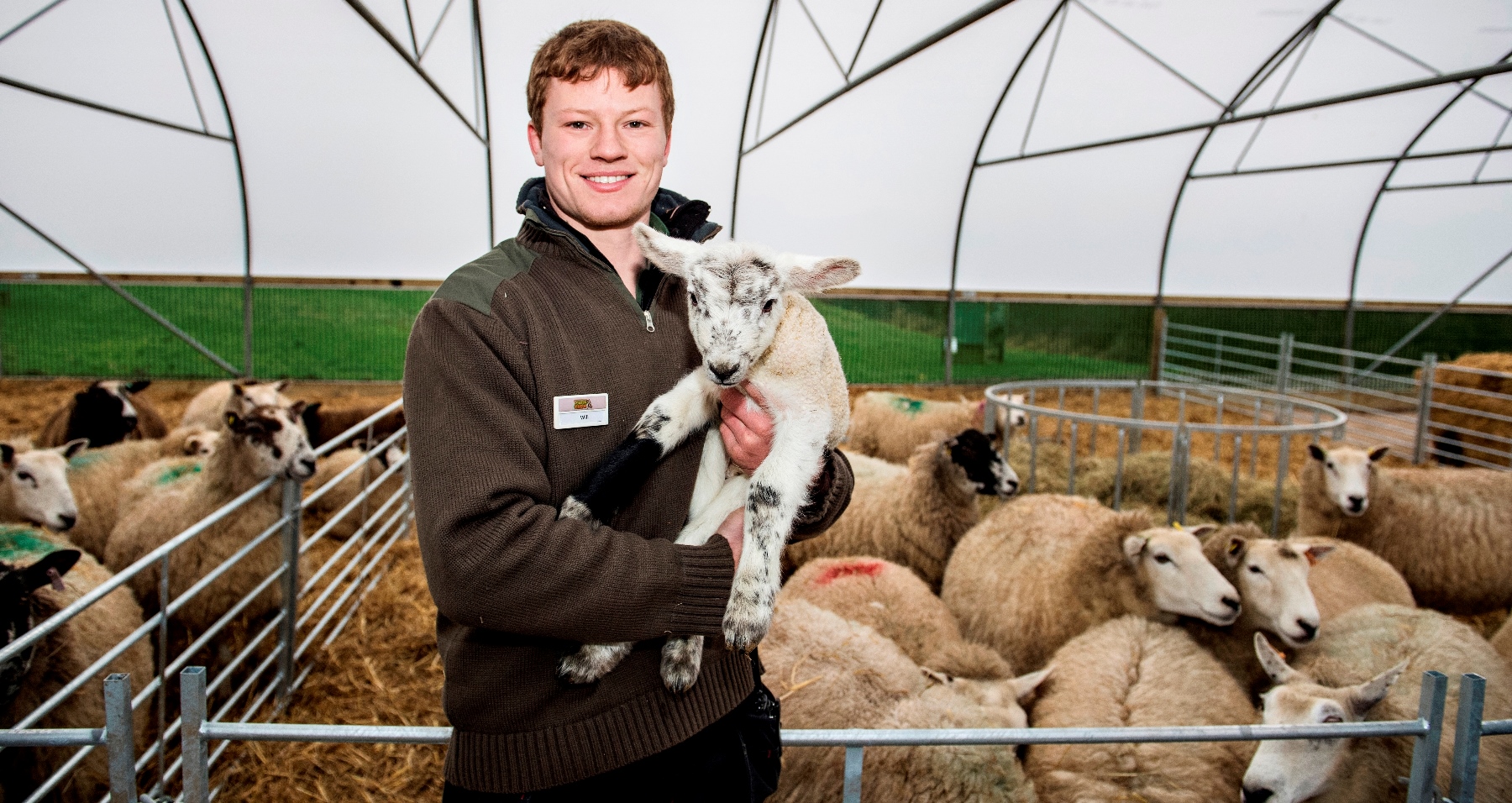 Will Jay, the National Forest Adventure Farm’s Livestock Team Leader, is responsible for the care, feeding, nutrition and health of all the animals on the Farm.  He will be overseeing the lambing of the 78 ewes this February. Here’s an insight in to what’s involved.

We plan to have ewes giving birth during the school holidays in February and at Easter. The gestation period for a sheep in about 147 days so we work backwards and make sure that tups (rams) are in with the ewes at the correct time. The tups wear a special harness that marks a ewe so we know whether the sheep is likely to be pregnant or not. By changing the colour of the mark every 2 weeks we can have a good guess on when the lambs are due.

We scan the ewes at about 80 to 90 days to see not only if there are pregnant but how many lambs they are carrying. We mark them with different colour to show if they are pregnant with one (blue), two (no mark) or three (green) lambs.

About four to six weeks before the lambs are due, we bring the ewes in to our Lambing Live tent. Lowland sheep do need a bit more maternity care than highland sheep and bringing them in means we can monitor their health and nutrition. For example, if we know a particular sheep is carrying triplets, we make sure she gets enough feed.

When the lambs are due, we monitor the ewes regularly including through the night. Most ewes will give birth unaided but in some cases we have to intervene including when a lamb is breach or has its legs and head facing backwards.  You may have seen farmers rubbing a new born lamb with straw. This helps stimulate breathing after a difficult birth.

Ewes can only feed two lambs effectively so in the case of triplets one has to be taken away. After the lamb has had its important colostrum milk, we either try to get a ewe with only one lamb to ‘wet adopt’ it or house the lamb with other triplets. We have an on-demand milk feeding machine which supplies formula milk whenever a lamb needs it.

The ewes and lambs will be kept in our Lambing Live tent and moved to the ‘nursery’ area until there is enough grass in the fields to feed them. 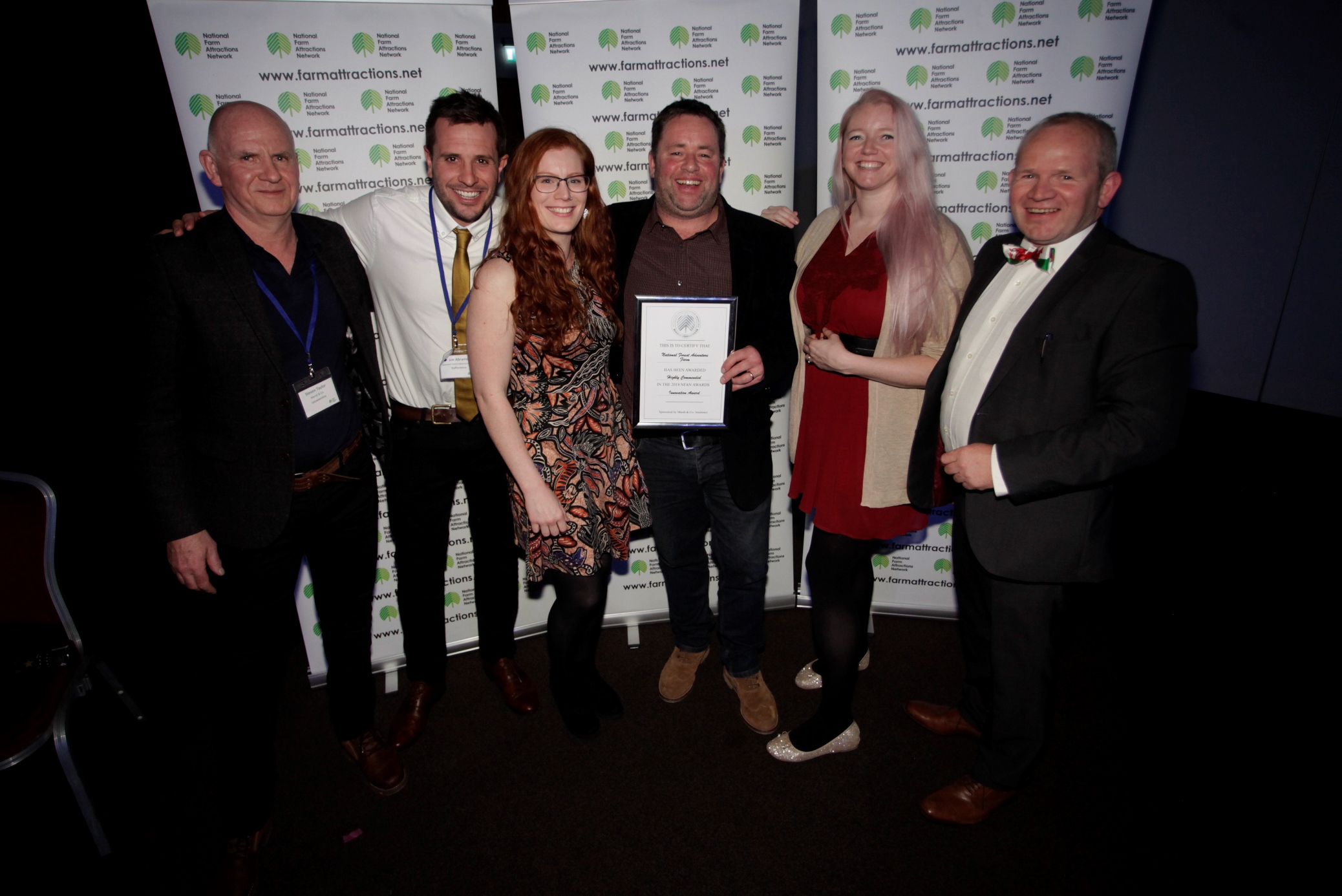 We’re delighted to have been awarded ‘Highly Commended’ in the 2018 National Farm Attractions Network Awards Innovation Award for our Help the Farmer activity.

Our February Half Term Help the Farmer event has been designed as a weather proof added value activity for children and adults to enjoy during our New Life on the Farm event. Click here for more info. 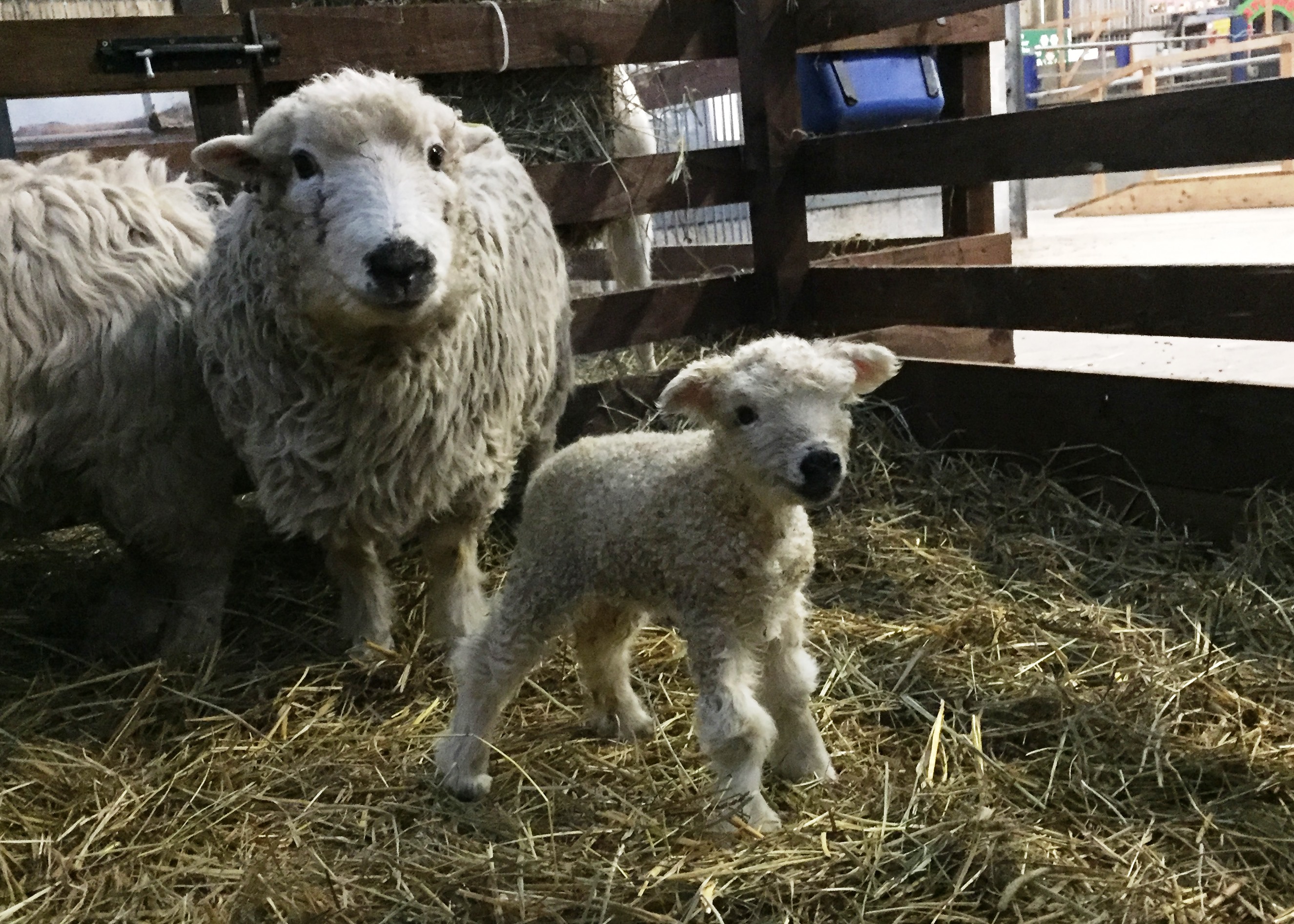 Out first lamb of 2018 was born overnight on Saturday 6th January. The birth was unassisted and the lamb and it’s mother are both doing well. The lamb is a Greyfaced Dartmoor sheep. Their fleece so thick they need to be sheared twice a year. The lamb is currently in our animal barn waiting to say hello! 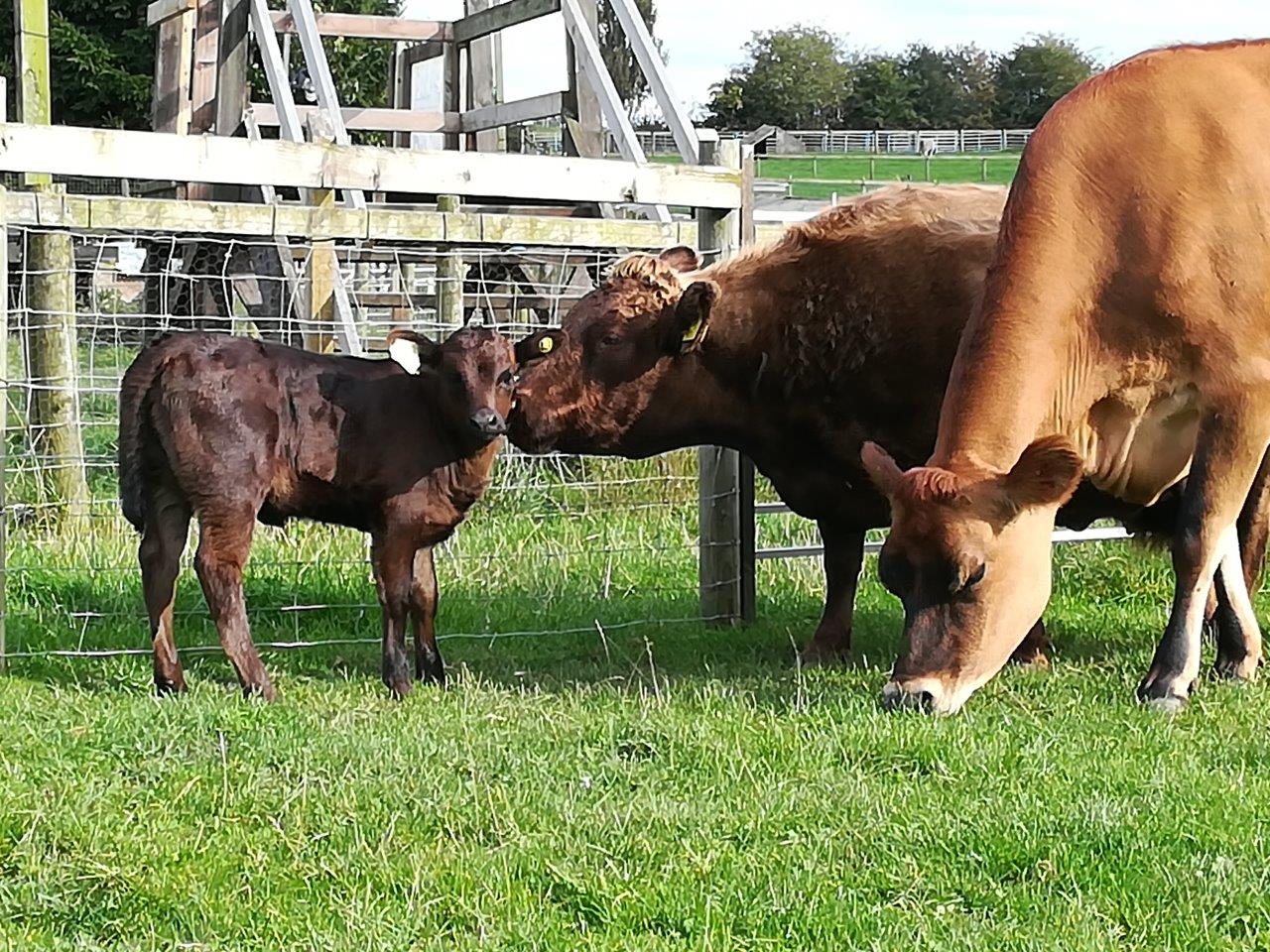 “Dunker” the Dexter calf was born at the farm 3 weeks ago to mum Crumpet. The Dexter breed, which originates in Ireland, is the smallest of British cattle breeds. They are very versatile and also very hardy. Also, being pint sized means the calves are very cute!

On 24 August 85 Texel and Beltex ewes arrived at the Adventure Farm. The shearlings  (young sheep that have had their first shearing) were born in Spring 2016. They are mules which are sheep cross-bred with hardy breeds like a Blueface Leicester.

Their new home is a field attached to the Adventure Farm. Very soon our Charollais ram will meet the new arrivals you’ll be able to see the resulting lambs in our Lambing Live tent in the Spring! 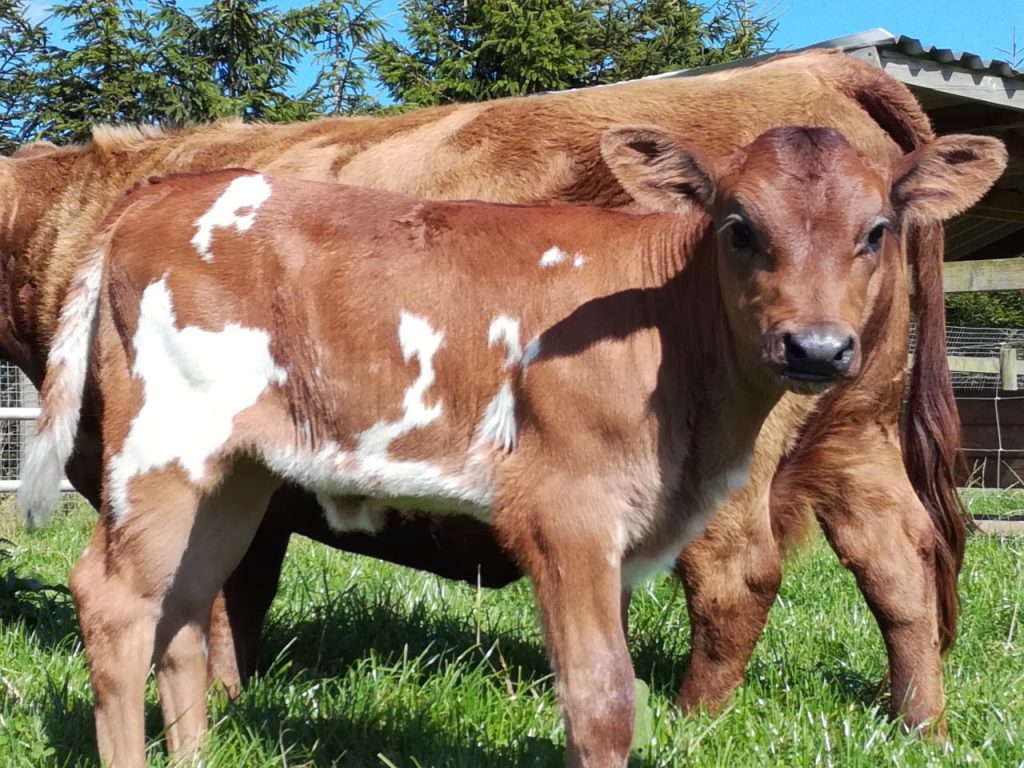 Meet “Baby” Belle, a Jersey cross calf born to mum Nancy 2 weeks ago at the farm.

Tragically, Nancy died soon after giving birth, but a happy ending was in store for our fairytale calf when Belle was adopted by Bambi, another Jersey on the farm.

Both mum and Belle are doing well and can be seen out enjoying the sunshine in the animal paddocks! 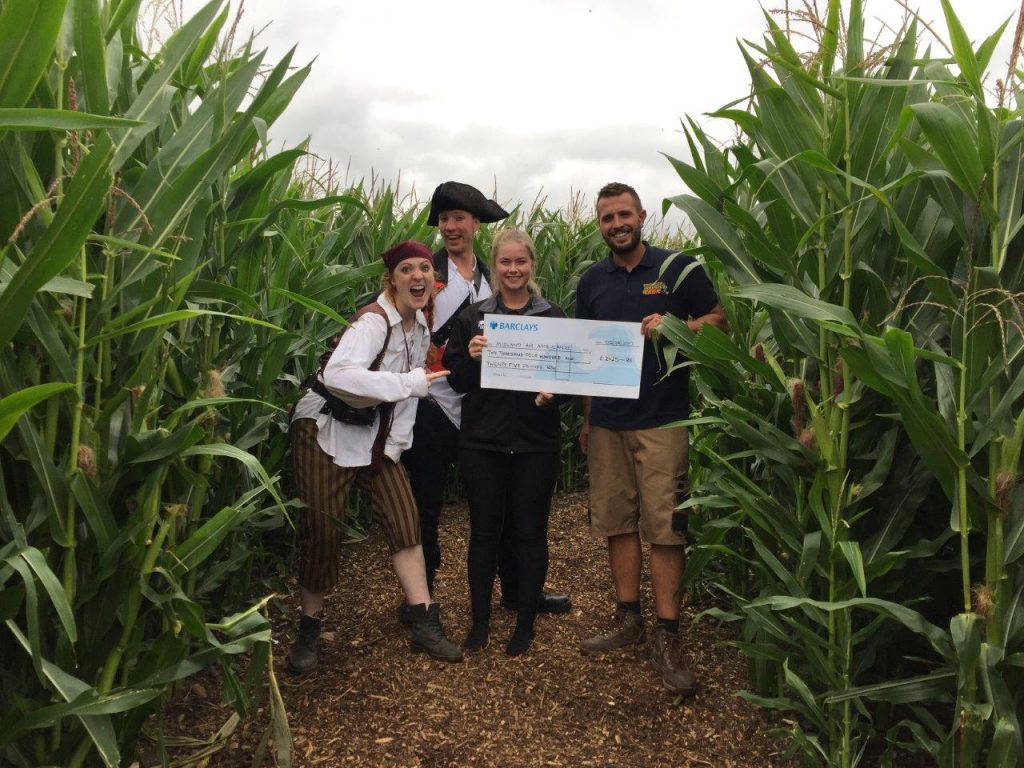 On Saturday 5th August over 400 visitors helped us to raise a huge £2,425.00 for the Midlands Air Ambulance Charity at a special Twilight Maize Maze event at the Farm.

Visitors had the unique experience of navigating our 10 acre pirate-themed maize maze at dusk. Entertainment was provided by the Farm’s pirates, Captain Del Gardo and First Mate Eel Breath. There was also a bar, BBQ and disco for visitors to enjoy.

Ivor Robinson, the Farm Director commented: “We’re delighted that so many people came and enjoyed the evening and that we raised so much for this important charity.”

Katie West,  Fundraising Manager for Midlands Air Ambulance Charity said: “We are very grateful to the National Forest Adventure Farm for choosing to raise money for our charity. With each air ambulance mission costing on average £2,500, funds raised from the event will help to fund a future lifesaving mission.” 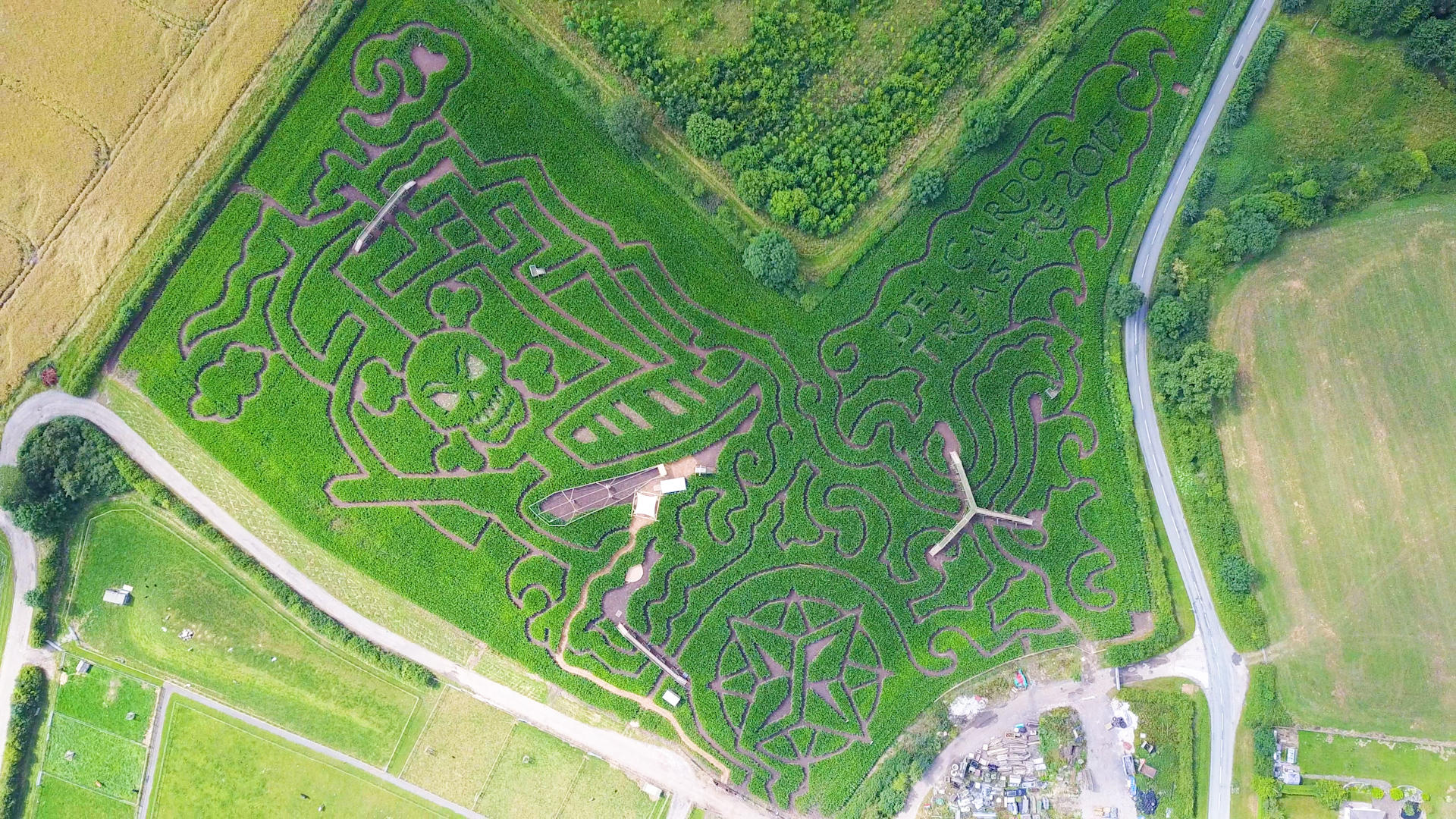 How is the maize grown?
“Maize grows from 0-2.4m (8ft) in just four months from May to August. At the Adventure Farm, the crop is drilled in early May once the threat of frost has past.  We plant about 625,000 seeds in the 10 acre field. We cross drill the field which means we plant seeds in once direction and then we go back over the field at a 90 degree angle. Planting twice as many seeds means the crop is denser making for a better maze. As the maize plant is originally from Mexico, it needs warmth to grow. So far this year we’ve been lucky to have a few very warm spells this year so we’re hoping for a tall maize crop.”

How is the maze created?
“Once we have decided on the theme we use a professional maze designer to create a plan. In June, when the crop is about 10-20cm tall, we use GPS technology to plot out the maze paths which are marked with over 1,200 canes. Then we use a mini tractor to rotavate the crop and therefore cut out the paths and the design.  For the more intricate detail in the design we actually hoe the crop out by hand. The paths are then rolled to make a suitable walking surface.  At the same time we lift in bridges and viewing towers. Just before the maze opens we fly a drone over the maze to check the design and make last minute improvements.”

How big is the maize maze? Is it easy to get lost?
The maize field is about 10 acres which is the same size as five and a half football pitches. It usually takes about 45 minutes to an hour to navigate it. We do provide maps for those who want them, however some people do get lost. That’s why we give each group a flag to wave at our Maze Master who sits on a high viewing tower. Anyone who needs help just waves their flag and is put back on the right track.”

Why did you open a Maize Maze?
“Many farms and farmers are diversifying. In 2004 we already had the maze crop planted when I had a brainwave to turn it in to a maze and open to the public. With long hours and determination we, my brother Ivor and I, did it and we’ve been going ever since. Every year we added more and more activities to complement the maze. So much so that we took the plunge in 2011 to be open to the public year round as the National Forest Adventure Farm.”

Why a pirate maze in 2017?
“We change the design of the maze every summer.  In the past our themes have been as diverse as Dinosaurs and a homage to Usain Bolt. This year we have chosen pirates as it is a fun family theme. Also we like to roll the theme out to other activities at the Farm. This year’s added entertainment includes Pirate Shows, Buccaneer Bootcamp, Pirate Duck Race and Cannonball Chaos which is set deep the maze itself. The Pirate Galleon in the maze is 115m from main mast to the bottom of the hull and 110m from the tip of the bow to the stern and the Compass which forms a Mini Maze is 50m from point to point” 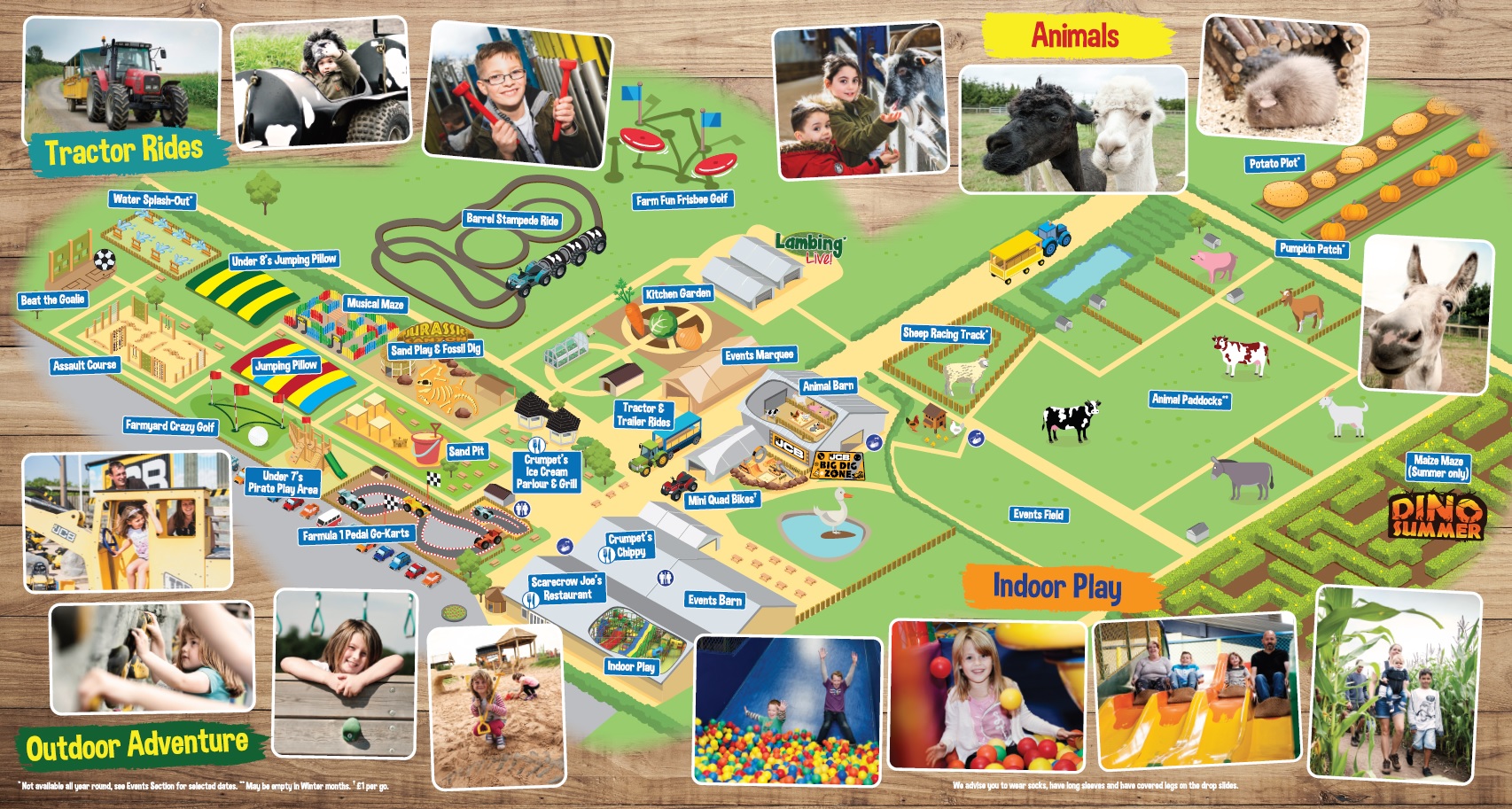